The winners of the BIP revealed 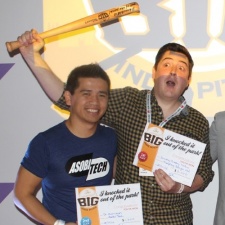 The quirky game sends players on an endless road-trip as they hurtle down the highway at breakneck speeds, all the while avoiding a series of hazards.

There will be crashing, lots of crashing.

In second place was Asobi Tech’s Dr Harrison and the Blood Crystals. Players must jump and duck over obtacles as they speed run through over 50 levels.

The team previously hooked the game up to a dance mat to really test players’ reflexes and fitness.

StarbeardPrototypeTrailer from David Christensen on Vimeo.

Thanks to all the 20 teams of developers that took part in the Big Indie Pitch.