Player One announces PokerMillion 2009 for mobile

And it may well be up for an Oscar 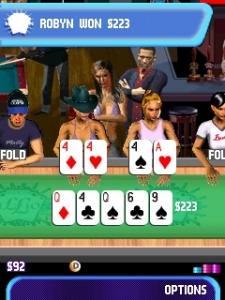 April 10th, 2008 - 10:25am
By Rob Hearn, Managing Editor
If living without a watch has taught me anything, it's that casual poker is a healthy alternative to its sinister real cash counterpart. Several casual poker games have appeared on mobile, including the excellent Rounders Poker, and Player One has just announced the imminent arrival of another, in the form of PokerMillion 2009.

(The screenshots above are from the last in the series, PokerMillion: The Masters, but they'll give you an idea.)

The game will feature seven types of poker and 12 characters to play against, all with their own playing styles. You'll also be able to talk to them, as Player One is promising interactive in-game dialogue.

There's going to be a tutorial (which is good, because we'll need to learn what the other six types of poker are), a Tournament mode, and  here's the best bit  a story-driven Career mode.

Why is this bit the best? Well, apparently Player One has drafted in a real life Hollywood writer to pen the words. The scribe's identity is a closely-guarded secret, and although we can probably rule out Charlie Kaufmann or M Knight Shyamalan, I'm still pretty excited.