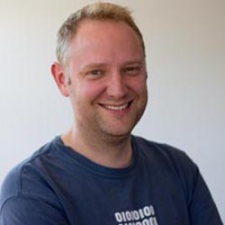 It was not his idea to call this keynote "The Mobile Game Development Commandments," he says, and he has little desire to proclaim his superior wisdom from on high.

"Thou shalt be Supercell," reads the first. And while tongue-in-cheek, there is a point here.

First is the studio's commitment to being very careful to only hire excellent, talented individuals - something that can be implemented even in more modest developers.

"We think we've hired good people, and the secret to that is testing," says Holmwood.

Another is its 'fast fail' philosophy, although that presents more difficulties.

"As a company we couldn't do that, we don't have the money they have - we couldn't fail and fail and eventually get a hit," he considers.

But even if you can't afford to fail fast Supercell style, he adds that teams shouldn't be afraid to experience "micro-failures" along the way.

"Thou shalt want to make a mobile game" is Holmwood's second point.

"I love making mobile games," he says. "To me, it's the most exciting place to be in gaming."

If there's any shred of reluctance in developing for mobile, then, you shouldn't be doing it.

By the same token, Holmwood adds: "Thou shalt design for mobile."

Indeed, The Secret Police's upcoming debut Dragon's Watch is designed for one-handed play and doesn't require the player to change their grip, hold their phone awkwardly or use another finger to reach inconveniently-placed buttons.

This is why The Secret Police has developed its own solution to allow Dragon's Watch to be playable without an internet connection.

"Thou shalt have a business model" is next.

"I speak to a lot of developers who say 'we don't know yet if it's premium or free-to-play," says Holmwood.

With such core differences between the two business models - and the different demands they put on game design - he believes this is worrying.

We built a system that data-mines the App Store comparing downloads and grossing ranks.

Holmwood's next commandment is intended to help developers find that clarity: "Thou shalt learn from others."

"My co-founder Ric [Moore] built a system that data-mines the App Store, and we went back several years comparing the download ranks to the grossing ranks," he explains.

The aim was to identify the games that had a high revenue compared to their downloads rank, and the conclusion was that many of these were Asian RPGs.

This is how The Secret Police arrived at its strategy, and eventually Dragon's Watch.

"Thou shalt iterate" is Holmwood's final word of advice.

Dragon's Watch boasts a scrolling dial at the bottom the screen - inspired by the early iPods - to arrange squad members in a circular formation.

The idea initially arose while prototyping a tower defence game, but the result was too intense. Rather than starting from scratch, though, the team realised there was something worth keeping in the scroll wheel.