All the crazy without the driving 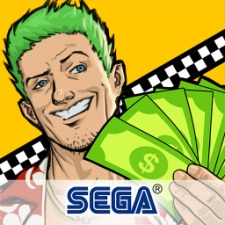 The game was originally launched on January 5th 2017 and is currently only available on Android in the Philippines.

Crazy Taxi Gazillionaire uses the characters and art direction from the original Crazy Taxi but swaps driving for tapping. Players will earn money through ranking up drivers and buying new cars, with money earned automatically as they play.

It is not the first Crazy Taxi game to be designed for mobile. Crazy Taxi: City Rush launched in August 2014 and was the most downloaded game on iOS for that month.

City Rush was developed by Sega Hardlight, which could be working on Gazillionaire. Its Operations Director Harinder Sangha recently told us that the studio is "working on a couple of projects based on popular Sega IPs."

The most downloaded iOS game in August, but how well does Crazy Taxi: City Rush monetise?