Get your game in the spotlight... the Amazon Appstore UK Developer Spotlight!

How getting yourself in the spotlight can lead to more downloads 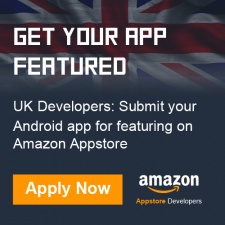 We all know what a competitive industry we work in, and how hard it can be to get your game noticed.

Amongst hundreds of thousands of games you may have just seconds to get a player to click on your icon and actually download your game. The importance of the icon design and how it represents your game should never be underestimated.

The Amazon Appstore team is passionate about supporting the growth of UK developers.

One of the ways they can make it easier for you to stand out from the crowd is by promoting you on the Amazon Appstore ‘featured’ banner and social media channels.

This exposure is part of the prize on offer if you submit, and are selected, for the UK Developer Spotlight campaign.

To be considered for featuring on Amazon Appstore, all you have to do is submit your latest game for consideration.

If selected, your new game could benefit from promotion on a featured banner on Amazon.co.uk, Amazon.de or Amazon.com.

The next deadline is 24 February 2017 but don’t worry if you’re not quite ready to launch - this is an ongoing programme to showcase UK talent at home and internationally.


Left to right: Ghosts of Memories by Paplus International, Delicious - Emily's Christmas Carol by RealNetworks and Rhinbo by Twimler.

If you’re unsure what a positive impact being featured can have, just take a look at some of the stats taken from research that Amazon Appstore carried out in 2016.

Indie games featured by Amazon in the Developer Spotlight saw cumulative daily downloads increase by 275% on average. Developers also saw an uplift in the weeks after featuring, an average increase of 28% compared to downloads before the feature.

We hope to see lots of your games in the spotlight soon.

Why is Amazon shutting down its Underground initiative?