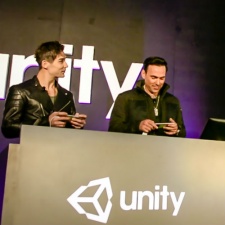 Jason David Frank, famous for playing the Green Ranger in the classic Power Rangers series, and Ludi Lin, the Black Ranger in the upcoming film, went head to head on a new mobile game from San Francisco-based studio nWay.

The fight was won convincingly by Frank, proving himself a dab hand at mobile games.

Power Rangers: Legacy Wars is set to launch on iOS and Android on March 23rd, just one day before the new Power Rangers film hits cinemas.