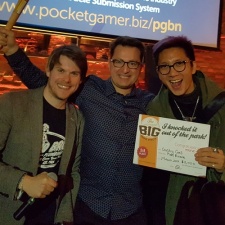 Pixelbizarre took home the coveted Big Indie Pitch bat and other prizes during GDC thanks to its panic-inducing arcade game Crashy Cars.

The game has players setting off cars across an intersection where they must avoid crashing vehicles into one another to rack up a high score.

Crashy Cars is a simple idea, and one that is instantly accessible but equally a challenge to master, winning over judges with its pure fun gameplay and well executed concept.

In third place was Game Revenant’s Where Shadows Slumber, a Monument Valley-esque puzzle game in which players must use shadow and light to unlock new paths and reach the end of the level.

Thanks to all the developers who took part in this year’s Big Indie Pitch at GDC.

Thanks also to our sponsors iDreamSky, Omlet Arcade and Zeptolab.

The Big Indie Pitch returns to San Francisco for GDC 2017