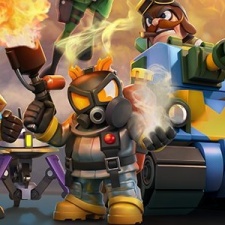 Gameloft and Ubisoft have both revealed new games in the vein of Supercell’s hit mobile title of 2016 Clash Royale.

Gameloft’s new real-time tactical combat game Blitz Brigade: Rival Tactics is styled in much the same way as Supercell’s title. Players must cross two bridges and destroy the towers on the other side.

It includes a roster of numerous and upgradable characters giving users the option to enact unique strategies customised to their own playstyles.

Despite the new perspective, users will still find themselves selecting cards and sending units into battle as they try to destroy their opponents based on the other side.

Gameloft and Ubisoft aren’t the first to take inspiration from Supercell. US developer Hi-Rez Studios had previously announced Smite Rivals for mobile, a Clash Royale-like game that used three lanes instead of two.

That title was later cancelled however, with Hi-Rez citing the game needed "significant additional development" after early playtesting, something it evidently wasn't willing to invest in.

It’s no surprise that developers are looking into using and expanding on the design of Clash Royale. Since its release a year ago in 2016, the game is thought to have generated over $1 billion in revenue.