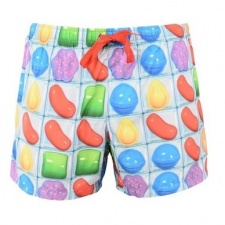 The brainchild of designer Jeremy Scott, who's previously invoked brands such as Snickers and Transformers in his designs, the line splashes the instantly-recognisable candies and font of Candy Crush Saga across swimwear, a backpack and an iPhone case.

For King's puzzle game to inspire such a populist designer is a testament not only to the size of the franchise, but also the ubiquity that mobile gaming has achieved.

Scott himself agrees. “I think almost everyone plays, right? It’s kind of off the charts,” he told Vogue. “My mum and my nephew… they both play it. It’s for everyone.”

King Narrative Designer Yonna Ingolf added: "It's a very cool thing. It’s the first time we’re partnering with high fashion. It felt like a natural step for us. Jeremy’s mind is very ‘candy’."