Already in closed beta, but a long road ahead 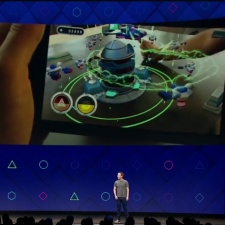 Facebook is working on a new augmented reality platform for mobile devices that will support games and other location-based activities.

He showed off how it had been working on adding 3D effects to still images, such as being able to pan left to right on an already taken 2D photo, while also adding different lighting effects and new objects to the space.

Zuckerberg also showed off its object recognition technology that could recognise objects on the camera and provide appropriate animations, such as flowers blooming on a plant, steam from a coffee mug or a description of a wine bottle.

He then briefly showed off a video in which a father, sat in a waiting room with two children, turned a table into an AR gameboard. In the demo of a tower defence game, the kids swatted enemies on the table that they could see on the mobile device.

Though no specific games were mentioned, Zuckerberg did tease that it was looking to bring games to the platform in future.

Other uses for the AR platform included leaving messages for friends in specific places in the real world, such as a table in a café, and creating virtual art installations only viewable through a phone.

The AR platform is already in closed beta.

Zuckerberg cautioned however that it will take a while to develop and the user experience “is not going to change overnight”.

“Overtime I think this is going to be a really important technology that changes how we use our phones, and eventually all technology,” he said.