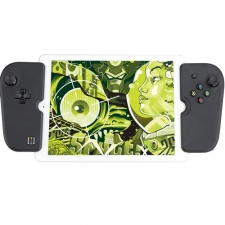 US-based Gamevice has raised $12.5 million in a series A investment round to develop attachable game controllers for regular smartphones and tablets.

Gamevice is currently working on establishing new partnerships to make its gamepads compatible with over one billion mobile devices.

The funding is set to be used to rapidly increase the company’s production and global distribution after selling out of its products, already available in Apple Stores, for “most of the holiday season”.

The investment round was co-led by TransLink Capital and California Technology Ventures (CTV), as well as BAM Ventures, TYLT Ventures and former Kabam CEO Kevin Chou. The latter has also joined the company’s board of directors.

The idea of mobile phone game controllers more akin to those for consoles has been around for a while, but the Nintendo Switch’s early success with the hybrid console/tablet model has highlighted its potential for mobile gaming.

“The Switch has proven that consumers want a form factor that is portable and mobile,” Gamevice CEO Phillip Hyun told PocketGamer.biz.

“It helps us that Nintendo will also be pushing to bring better content to this type of platform.”

Hyun added that the response from developers has been positive, “because they didn’t have to figure out some new touch screen control”. Demand from consumers is also said to be high, despite the lack of a break out new game coming into the ecosystem.

The combination of these factors and success of the Switch helped attract a strong investment round in the company.

“This showed that the form factor worked well in providing the consumer with console-like experiences and capabilities on their existing phones and tablets,” said Hyun.

“The audience we are going for enjoy the portability of mobile, but desire the types of games you typically find on consoles, such as first-person shooters, RPGs, fighting games, sports games and titles like Minecraft,” he said.

Gamevice appears to face a few challenges in its early efforts to create mass market appeal for its controllers.

Convincing the general consumer to pay extra for a console-like gamepad for which there are only a select number of games (currently nearly 1,000 iOS titles), will be no easy task despite the Switch’s success so far.

Getting developers to make games built for an optional gamepad with a limited audience, rather than just for touchscreens, also presents a challenge. Early adopters include TellTale, whose game The Walking Dead: A New Frontier is being sold as part of a Gamevice for iPhone bundle.

Hyun is confident that Gamevice’s controllers will continue to attract the attention of more consumers and developers, as are investors.

“The games that currently are available and coming to market soon are games that we believe we can partner with in getting units into the market, especially when the experience is noticeably different than playing on an iPhone or iPad, and will become even better in the future,” he said.

“We see developers at least providing both options - touchscreen and controller - for games that would be better with a controller but need to have a touchscreen option. Obviously, solving [consumer adoption] solves [developer support], which only time will tell, but we feel our partnership with companies like Apple will help push that market.

“The other part we will be announcing later is the ability to use the product for more than just games, so there will be a need for our product to do a lot of other great things. More on that to come.”