Only works on iPhone 6S and up 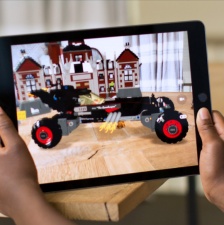 The ARKit uses "Visual Inertial Odometry" to track the world, and fuses this camera sensor data with CoreMotion data. The data works together to accurately detect how a device moves in the environment without any calibration.

ARKit can also detect horizontal planes, such as table tops and floors, and use these to determine how to place objects in a room. It also features lighting detection to better understand how much lighting to apply to objects.

The AR technology will only work on the A9 processor and above, which means only the iPhone 6S and above will be able to leverage ARKit. More information and full documentation on the framework is available on Apple's website.

Apple announced its ARKit as part of its WWDC keynote speech on June 5th 2017. It also revealed an overhauled App Store, which will feature more editorial content and a new homepage for games on the store.

Alongside this reveal, developer ustwo revealed and launched the sequel to its popular puzzle game Monument Valley. Monument Valley 2 is available on iOS for $4.99.