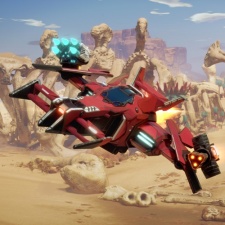 The game has shades of No Man’s Sky in its presentation though it's on a much smaller, though still substantial-looking, scale.

Players will be able to explore a star system of seven planets each with their own unique ecosystems, with the ultimate goal of freeing Atlas from an evil robot force called the Forgotten Legion.

Players can get their own physical customisable starship for the game. By mixing and matching pilots, hulls, wings and weapons players can assemble their own starship, with changes made to the physical ship instantly appearing in-game.

As well as making aesthetical changes to the player's starship, alterations will also offer up new tactical options.

Starlink: Battle for Atlas will be released in autumn 2018 on Nintendo Switch, PS4 and Xbox One.