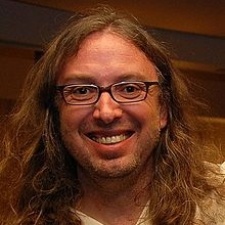 Speaking Develop:Brighton 2017, Devine discussed the key differences between augmented reality, virtual reality and mixed reality, and why the latter is set to take over the world.

Devine described VR as a digital environment that shuts out the real world, meaning users are immersed in the virtual world but cannot see their friends or reach for a drink.

Augmented reality meanwhile overlays information on top of the real world, but the technology has no comprehension of the world itself.

Devine said AR is often confused with MR, but he explained that the latter is defined by digital content interacting with the real world around the user.

“Mixed reality is the mixture of the real world and the virtual world so that one understands the other,” he said. “This creates experiences that cannot possibly happen anywhere else.”

On exactly what Magic Leap is up to, Devine didn’t reveal any details about the technology. He did however discuss an internal game design competition called Pitchfest, in which the company set about discovering exactly what MR is.

Previously the firm had developed a game called ‘Gerald goes Bananas’, in which users had to fire a banana gun into a basket, which would then be thrown back at them. But this was more akin to AR than MR, he said.

So for the Pitchfest, Devine set a few rules that developers had to think about for their apps.

The top pitches from within the company included a game called Vroom, in which users could create a race track around their living room and then drive cars on it.

The problem with this concept, he said, was while it was fun to create a track, playing it wasn’t actually fun and the cars became difficult to control as they were driven in varios directions around a room.

The winning title, called Catastrophe, involved the player herding 20 cats into a carrier with just a few items such as laser pointer and water spray. One of the interesting learnings from the project was how players tried to use their feet to move cats into the carrier, which had no real effect on the game.

When it comes to creating the killer app for MR, Devine said this would stem from the idea of an ‘everyday adventure’.

He used the example of a concept called Ghost Girl, in which a ghost called Alice would live in your house and each day could present the player with new interactions and a new adventure.

While just a concept, he suggested this idea could be the basis for experiences based on big IPs like Harry Potter and Star Wars, creating adventures everyday encouraging the user to wear the headset again.