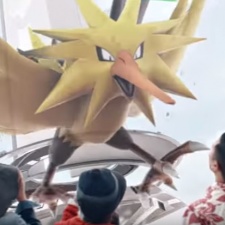 Niantic is set to finally let loose legendary pokemon in Pokemon GO during a special event on July 22nd.

The developer is running a real-world and in-game event called Pokemon GO Fest for the day which tasks players across the world with collectively catch pokemon to unlock rewards for all users.

If enough pokemon are caught during the challenge, the first legendary will be revealed in Grant Park in Chicago. Should those trainers there be able to work together and defeat it, then it will begin appearing in Raid Battles around the world.

Raid Battles is a new coop feature recently implemented as part of a revamp of the game’s combat system.

Legendary pokemon shown off in the trailer include Zapdos, Mewtwo, Moltres, Articuno and Lugia.

Niantic will livestream the entire event from Grant Park on Twitch and YouTube.

Niantic has become something of a specialist at running in-game events in Pokemon GO, which typically result in a boost to the game's grossing performance.