Follows in the footsteps of Kate Upton, Mariah Carey and Arnold Schwarzenegger 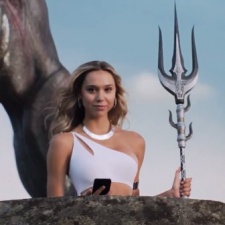 US developer MZ has brought on Instagram influencer and model Alexis Ren to star in its new TV and digital ad campaign for Final Fantasy XV: A New Empire.

Ren has more than 10 million followers on Instagram and 945,000 on Twitter. As well as having a modelling career and being a social media star, she also runs her own clothing line.

Ren will feature in several TV spots over the coming months, including during NFL Football matches, as well as in ads on mobile devices and banner advertising online.

MZ has previously recruited the likes of Kate Upton, Mariah Carey and Arnold Schwarzenegger to star in its ad campaigns for Game of War and Mobile Strike.

“The women in the Final Fantasy universe are strong and assertive, so when we looked for someone to personify them in our advertising, Alexis was a fitting choice,” said MZ COO Kristen Dumont.

“Alexis is a smart and talented young woman who has built and currently leads a legion of more than 10 million followers, through social media. We believe Alexis is going to be a big breakout star, and we are proud to highlight her as the archetype for this fun mobile game.”

MZ has focused much of its user acquisition efforts on Final Fantasy XV: A New Empire in recent months as it decreased its marketing spend for its other titles Mobile Strike and Game of War.