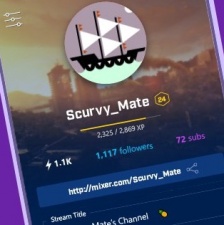 Android users will be able to stream any game they like using the app without the need for extra software or equipment.

Games on iOS will require ReplayKit functionality to be streamed, however.

Users on any mobile device will also be able to co-stream with up to three other users from multiple platforms, such as mobile, PC and Xbox One.

The app can also be used for vlogging and chat, the latter feature useful for interacting with viewers.

Fomerly known as Beam, Microsoft rebranded the streaming service as Mixer earlier this year as it launched the open beta of the new mobile edition Mixer Create.

The streaming service is a competitor to the hugely popular games broadcasting platform Twitch.

PGC Helsinki Digital: What is happening at ID@Xbox