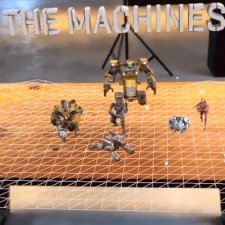 The game uses Apple's ARKit technology and Unreal Engine 4 for a multiplayer MOBA experience. Two players deploy units on a virtual battlefield that is built on top of a flat surface that has been scanned in.

Players can freely move around the battlefield in the real-world to look at the action from different angles. They can also physically move the AR camera closer to the battle, which makes in-game sounds louder. This can be seen in the video below, uploaded by Directive in July 2017.

The robots are coming

The Machines is set to launch sometime in September 2017. It was shown off using the iPhone 8, which is being built with ARKit games in mind, and so will likely launch soon after the device.

The iPhone 8 and 8 Plus were shown off at the special keynote event, and are set to launch on September 22nd. Another iPhone, the iPhone X, is due to launch on November 3rd.

Google has also revealed its own AR development framework to compete with ARKit, called ARCore. It is initially useable with the Google Pixel and Samsung Galaxy S8.