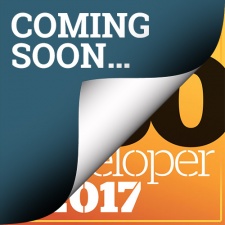 The eighth edition of the annual PocketGamer.biz Top 50 Developer list will be revealed on Monday, September 25th 2017.

We’ve rounded up the hottest mobile games companies the industry has to offer from all around the world.

It includes developers big and small from North America all the way through to Europe and Asia.

The Top 50 Developer list for 2017 has been carefully selected by PocketGamer.biz’s team of mobile experts.

It’s based on a combination of factors: the studios making the most exciting games, the innovators, the money-makers and those that have successfully expanded their business since our 2016 top 50.

This year’s list features a plethora of new entries, highlighting a competitive industry filled to the brim with talent.

So keep the date in your diary - the PocketGamer.biz Top 50 Developer 2017 list is coming on Monday, September 25th, 2017. We'll be counting down to the number one studio throughout that week.

PocketGamer.biz to unveil Top 50 Mobile Games Developers this summer - Have your say