Buy some doughnuts, play the game, everyone wins 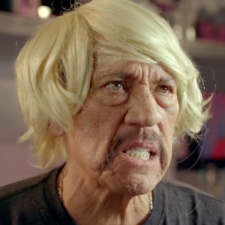 Jam City has tapped up actor and doughnut shop owner Danny Trejo for an ad campaign for its game Family Guy: Another Freakin' Mobile Game.

In-game, players will battle Trejo in a series of match-3 duels. In the real world, players can get exclusive merchandise from Trejo's Coffee & Donuts if they show that they have the game installed on their phone.

Trejo has also appeared in two ads for the partnership, both of which were filmed in his coffee shop. The partnership has been organised to celebrate the 300th episode of the Family Guy TV show.

"We are all in on the Family Guy brand and it's awesome to celebrate the show's 300th episode with an icon like Danny Trejo," said Jam City co-founder and president Josh Yguado.

"Family Guy: Another Freakin' Mobile Game thrives on the same style of topical yet self-aware humour as the show and Danny's appearance in the game is no exception."

Family Guy: Another Freakin' Mobile Game first appeared on our radar back in March 2017 when it was found in soft-launch. While it has shown to be a steady performer for Jam City, it has yet to reach the heights of predecessor The Quest For Stuff.