Eddie the Bird joins the real Eddie and co 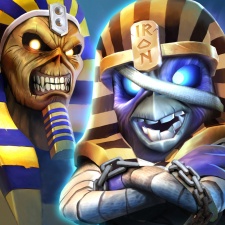 Suffolk-based mobile games publisher Nodding Frog has brought some of Rovio's Angry Birds characters to its game Iron Maiden: Legacy of the Beast.

The deal sees Eddie the Bird join Legacy of the Beast as four different variants of main character Eddie. His bird variant first appeared in Angry Birds Evolution as a playable character.

Nodding Frog will run an event from February 6th to 20th allowing players to use the Eddie the Bird variants in their team. After this time, the character will be made unavailable.

You can't destroy the metal

"As huge metal fans we're delighted to see our tribute to Iron Maiden continue through into Legacy of the Beast," said Rovio VP of games and Angry Birds Evolution product lead Miika Tams.

"Eddie the Bird has been a massive hit in our game and we're sure that players of Legacy will have just as much fun with him!"

Rovio has continued to bring characters into Angry Birds Evolution since the Iron Maiden deal. It most recently partnered with the NFL to bring 32 new characters to the game until the Super Bowl.