Adds a programmer, artst, producer and technical designer to the fold 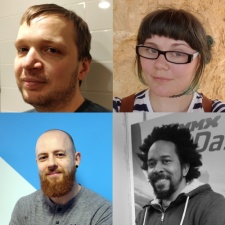 Ainsley joins the studio after over a decade at Total War franchise developer Creative Assembly. He joined the developer as a programmer in 2007 and rose to technical lead by May 2016.

Oram is a 3D artist with a background in animation. Her most recent role was as a 3D modelling artist at Blue-Zoo Animation Studio on several children's TV shows.

Williams started in the games industry as a QA tester at Sega Europe. He has previously held roles at Lionhead, EA and Playfish, along with a stint as a project manager at Mind Candy.

Finally, Jija has been in the games industry since 2006, starting at Kuju Entertainment. He has since held numerous design and scripting roles at Lionhead, Microsoft and Supermassive Games.

Hutch has grown fairly rapidly over the past 12 months, adding another two staff members in December 2017. Its most recent game, Top Drives, cleared three million downloads in its first two months of release.