Play Angry Birds for cash on the WorldWinner platform 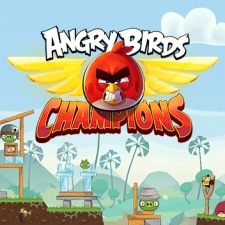 Angry Birds Champions will play like a traditional Angry Birds title, with players firing the titular creatures at buildings to topple them and score points. The main difference is that players will be competing for real money against others around the world.

The game will feature two tournament modes, each consisting of three levels, with players competing to score the most points and win the prize. A new "swap" feature has also been added to allow players a limited number of opportunities to change which bird they currently have in their slingshot.

GSN will kick off the launch with a $10,000 sweepstake, with the overall winner taking home $5,000. Players gain one entry into the sweepstake for every $1 they spend in Angry Birds Champion.

Put your skills to the test

"We wanted to take Angry Birds to the next level by offering our huge fanbase a chance to put their slingshot skills to the test, and compete for real money," said Rovio EVP of Games Wilhelm Taht.

"WorldWinner represents the best in class when it comes to designing tournament versions of the world’s most popular games. We felt confident that their team would deliver a compelling experience that brings together the beloved characters of Angry Birds coupled with the challenging gameplay and the necessary strategy and skill."

Rovio is also returning to its popular Angry Birds franchise for its next game, Angry Birds Blast Island. The game was soft-launched on Android on February 1st 2018.