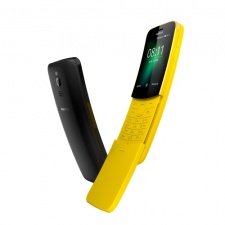 The new devices cover both the high-end and entry-level markets. At the top end is the Nokia 8 Sirocco, which includes a curved screen, stainless steel frame and Pro Camera mode. It will launch in April 2018 for around $925.

The Nokia 7 Plus and New Nokia 6 will take up the mid-range, priced at around $490 and $345 respectively. The two phones are essentially the same, with the 7 Plus featuring a better processor and a battery that will supposedly last up to two days.

Finally, the low-end Nokia 1 will run on the Android Oreo Go edition OS, optimised for devices with 1GB of RAM or less. It can also be customised with different face plates and will retail for around $85.

As well its smartphones, HMD is also relaunching the Nokia 8810 feature phone, known for its curved slider design. It will come equipped with 4G and access to apps such as Facebook and Twitter, as well as a "revamped" version of classic game Snake.

"This time last year, we started our journey with huge expectations from fans and a massive responsibility to deliver on the legacy of one of the most innovative brands in our space," said HMD Global CEO Florian Seiche.

"Since then we have reintroduced well-loved icons, forged partnerships with friends old and new and delivered our pure, secure and up-to-date Android experience across our smartphone portfolio. Last year we shipped over 70 million Nokia phones."

Rumours of new Nokia devices surfaced earlier in February 2018 ahead of the Mobile World Congress in Barcelona. It was suggested that the relaunched feature phone would be the more iconic Nokia 3310 model, and only three smartphones were rumoured at the time.