Next Games and AMC turn to Jesus to teach gamers about The Walking Dead: No Man’s Land 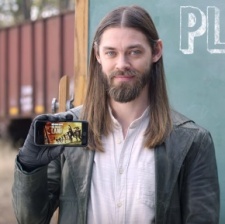 The Walking Dead’s Tom Payne and Alanna Masterson have been drafted in by Next Games and Major TV Network AMC to host a series of tutorial videos to promote The Walking Dead: No Man’s Land.

The collaboration has been called “Playtime with Jesus” and features Payne, known for his character Paul “Jesus” Rovia, showing Masterson, who plays the role of Tara Chambler, how to tackle story missions and fight enemies with unique weapons.

The videos were shot during the filming of season eight which resumed airing on February 25th following a mid-season break.

“‘See it on TV, play it on your phone’ is an experience we’ve committed to delivering with The Walking Dead: No Man’s Land, and ‘Playtime with Jesus’ is a fresh and unique take on that,” said Next Games chief marketing officer Saara Bergström.

“With the help of our partners at AMC, we teamed up with Tom Payne and Alanna Masterson to create this fully integrated talent-led campaign that will live across multiple platforms and align with the mid-season premiere of The Walking Dead on February 25th.”

The collaborative digital campaign kicked off yesterday to coincide with the shows mid-season premiere and is billed to be the first of its kind. The shorts will be watchable in-game, on YouTube, Facebook, Twitter and AMC.