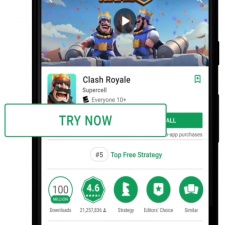 Google has revealed that Google Play Instant is now open to all Android developers at its I/O 2018 developer conference.

The service allows for all Android apps and games to be launched instantly without the need for an install.

The feature will also support progressive download support for executable code and game assets and will allow developers to use NDK and game engines with their existing toolchains. To make instant apps and games easier to build Google has also released a Unity plugin and beta integration with Cocos Creator.

Google hopes developers will use the feature to demo their creations on their websites with users sharing them to provide word of mouth. Once in the app or game users will have the option to install the full version of Google Play Instant should they enjoy the experience.

According to Android product manager Stephanie Cuthbertson early adopters have seen up to 15 per cent more installs.