User can collaborate in the virtual space 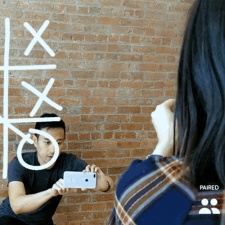 Google is rolling out some key updates for its augmented reality SDK ARCore 1.2 including new shared AR experiences.

The web giant is introducing Cloud Anchors that lets users collaborate together in AR. Examples of the new feature in action include redecorating a home, playing games like noughts and crosses, and painting.

Google said Cloud Anchors would be rolled out across Android and iOS.

Other new features include Vertical Plane Detection, that lets developers place AR objects on more surfaces such as textured walls; and Sceneform, that lets Java developers make 3D apps from scratch, without the need to learn APIs such as Open GI.

It’s been a busy few days for announcements from Google. One of its biggest announcements was that Google Play Instant is now open to all Android developers, while it’s also detailed its big plans for AI and the winners of the Google Play Awards 2018.

Amiki Cai is a staff writer at PocketGamer.biz. Previously she lived in China before moving to the sunny shores of the UK.