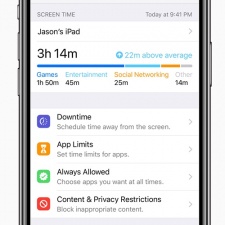 Apple has introduced a new Screen Time feature in iOS 12 that will let users set limits on the time they spend on apps.

The update provides iPhone users with detailed daily and weekly activity reports that tell them how much time they’ve spent on individual apps, as well as certain app categories like games.

Screen Time also lets users know how many notifications they’ve received in total and how often they pick up their iPhone or iPad.

Not just displaying this data to users however, device owners can also set limits for certain apps, categories and websites. Once the time limit is nearly reached, users will receive a notification that time is almost up.

After that, the app will be unusable. Though of course, technically users can just change the settings to unlock the app again.

Parents meanwhile will be able to check the activity of their children remotely within the same Family Sharing group to see where they are spending most of their time and set limits.

For example, children may be given an hour a day to play games, and can no longer access them after this period ends.

Users can also schedule blocks of time - when an iOS device can't be used. Parents can however still select certain apps to always be available, such as phone or books, for example.

These can now be grouped together or, during certain hours of the day, hidden from the phone’s lock screen display thanks to the ‘Do Not Disturb’ feature.

“In iOS 12, we’re offering our users detailed information and tools to help them better understand and control the time they spend with apps and websites, how often they pick up their iPhone or iPad during the day and how they receive notifications,” said Apple senior VP of software engineering Craig Federighi.

“We first introduced parental controls for iPhone in 2008 and our team has worked thoughtfully over the years to add features to help parents manage their children’s content.

"With Screen Time, these new tools are empowering users who want help managing their device time, and balancing the many things that are important to them.”

iOS 12 is expected to go live during the autumn.