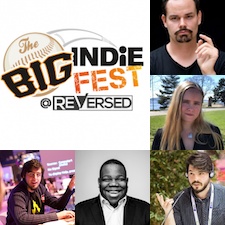 New for 2018, Vienna’s four-day Big Indie Fest @ ReVersed will feature 100 of the best indie game developers from central and southern Europe showcasing their latest work in the heart of Austria’s capital city this July 5th to 8th.

While the doors open to 4,000 members of the general public for the weekend, both Thursday and Friday are entirely dedicated to the industry and trade visitors.

An audience of more than 200 publishers, service providers, investors, media and other games industry professionals will join the exhibitors at the MuseumsQuartier for two days of intense networking, business meetings and learning.

With day one dedicated to the trade expo, the second day of the event features a full conference schedule of industry speakers and four seminar tracks covering everything from indie studio survival tips to successful international development strategies.

You can book your ticket now or find out more about each of the tracks below.

The conference schedule opens on July 6th with a keynote address from Vlambeer’s Rami Ismail, who will ask the question ‘What does it mean to be indie in 2018?’

The Big Indie Fest @ ReVersed team is rightly proud of the event’s Viennese heritage. With nearly two decades’ experience of working in Austrian game development, who better than Martin Filipp from the Pioneers of Austrian Game Development to explain what makes the capital city - and Austria in general - such a great place for making games?

CLRCRS is a collective of friends and multi-disciplined artists that aim to demonstrate ‘a radical attitude towards life's various aspects and colours’. Nino Werner will share his experience of creating 2D pixel fighting game BundesFighter 2 Turbo in just four months. Not only will he detail the creative process, the failures and overall successes, but he’ll also explain the game’s financing via the state organised GEZ, with ARD and ZDF.

Continuing the funding thread, Michael Schade, CEO and co-founder at Rockfish Games, will present a case study based on the development of Everspace. He’ll explain how the team launched and marketed the title on a tight budget, sharing his insights on using Kickstarter and working with influencers with the audience.

And for indie devs looking to maximise revenue for their titles with an international audience, Applanga’s Steffen Römer will cover the benefits of professional translation and localisation. He’ll report the kind of budget a studio might need, as well as the importance of tailoring an app store entry for unique territories.

In her seminar for students - or anyone just starting out in games development - Dutch Game Garden’s Eline Muijres will offer advice on how to get a job in the games industry. She’ll highlight the do's and don'ts when applying for jobs and setting up a portfolio.

There’s no point developing a game if you’re not going to ship it, so Des Gayle, founder and Producer at Altered Gene, will examine the steps that any studio needs to follow to ensure that the end result is the release of a game.

You won’t want to miss Benjamin Wahl of Skodone and what we think will be a fascinating presentation on the role of identity in games. He’ll consider social media, streaming and the ways that players represent themselves digitally. Taking in character creation, freedom of gender and appearance in titles such as Rust, Stardew Valley, and Job Simulator, Wahl will explore how player identity can change a game and what happens if developers take that decision away.

Rounding out the Practical Pursuits track is a panel session looking at the challenges of truly international game development. Led by Vlambeer’s Rami Ismail, he’ll be joined by Georg Hobmeier of Causa Creations; Mehdi Benkirane from FLIP Entertainment; and Alexey Izvalov from Enhance.

Is it more important to create video games as art, or to put food on the table? This track tries to find ways to balance artistic endeavours with the realities of running a business.

Bringing the four-episode The Lion’s Song to PC, iOS and Android in 2018 was an intense journey for Mi'pu'mi Games. Gregor Eigner and Stefan Srb will reveal how they kept the team motivated over long periods of time. Join them as they give an honest insight into the development cycle of an episodic project, highlighting successes, and surprises both positive and negative.

Pigmentum Game Studio’s Aleksandra Jarosz will address the challenges of creating serious games such as Indygo. She’ll reveal how the process of developing a game to fight against stigmatisation of mentally ill people presents a completely different challenge to creating games purely for entertainment.

Tackling one of today’s hottest topics head-on, Klaus Hufnagl-Abraham of IGT Austria examines how casino slot design best practices could lead to better loot box design. He’ll reveal findings based on actual casino games that shed light on the game mechanics that players actively enjoy, tolerate or reject. You’ll also leave with a better understanding of how to implement loot boxes with a higher moral code.

Closing out the conference is a panel session that aims to address the overarching theme of Culture versus Business from the final track of the day. We’re very much looking forward to hearing from a panel that includes Catharina Bøhler speaking about her experiences creating My Child Lebensborn, as well as Linsey Raymaekers and La Carga.

The Big Indie Fest @ ReVersed is open to trade visitors only, on Thursday, July 5th and Friday, July 6th. The conference schedule runs throughout the second day of the show.

These two days of trade focus will give delegates an opportunity to make contact with others in the industry, as well as hear first-hand from these amazing speakers and take lessons back to benefit their own businesses.

What’s on at next month's Big Indie Fest @ ReVersed

Over 60 great games on show at the Big Indie Fest @ ReVersed: here are 6 highlights