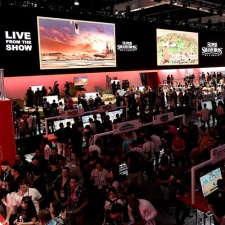 E3 2018 attracted 69,200 attendees as the conference continues to expand its consumer expo.

The event took place from June 12th to 14th in LA. It housed more than 200 exhibitors, 85 of which exhibited at the show for the first time.

Around 3,250 products were on show for attendees to either watch or play. This year 15,000 consumers were given access to the show floor to get hands-on with the latest games.

"E3 2018 was an enormous success, amplified by the thousands of gamers in attendance and millions more around the world who watched online," said Entertainment Software Association (ESA) CEO Michael Gallagher.

"E3 2018 reinforced the cultural prominence of video games for a global audience. Congratulations to our innovative exhibitors, members, and partners and to the millions of gamers who celebrated a spectacular E3 with us."

Key E3 announcements in the mobile space included a Command & Conquer Rivals game from EA coming to iOS and Android and a new The Elder Scrolls: Blades RPG from Bethesda.

Nintendo made a number of Switch announcements meanwhile, including new games such as Super Mario Party, Super Smash Bros Ultimate, Fire Emblem: Three Houses and Fortnite on Switch. The latter was subsequently downloaded more than two million times in less than 24 hours.

E3 2019 will return to the Los Angeles Convention Center on June 11th to 13th next year.