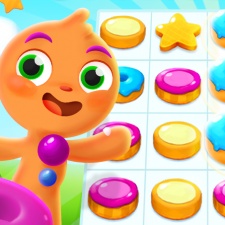 Players of Facebook Instant Games match-3 title Cookie Crush have started over one billion levels since its launch seven months ago.

The barrier to entry is much less of an obstacle for these titles than games players would otherwise have to download.

“While gamers in general seem to grow older and the so-called silver gamers come into view, our games on Facebook’s Instant Games mainly attract players between 18 to 34 years.

"For Cookie Crush for example these are mostly female, but also men in this age group are highly engaged.”