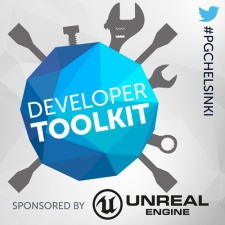 Pocket Gamer Connects Helsinki is a mere five days away and will touch down in Finland on September 11th to 12th.

As such, we’re keeping things on, ahem, track with our regular look into one of our 12 tracks on offer.

Today, we’re diving into Developer Toolkit track. From Unreal Engine and location-based tech to getting the most out of your team, this track is all about the technical side of games development.

09:40 – Kicking this off in our usual style is a superstar session. This time around we have Epic Games Unreal Engine expert Sjoerd De Jong and Cornfox creative director Heikki Repo on the Unreal Engine and the future of mobile games.

10:20 – Following on is Next Games lead designer Sulka Haro with some insights into the innovation that went into The Walking Dead: Our World’s new location-based gameplay.

10:40 – Next up is King lead producer Sabrina Carmona on creating agile teams and how to foster a culture of excellence while developing a game.

11:00 – Rolling on Wargaming Mobile games art lead Juuso Mattila will share some insight into how the developer created 100 tanks with just three people.

This talk goes through the tools and pipelines the trio developed to make this possible, from concept to animated in-game models.

11:20 – Flaregames software engineer Nicolas Frossard will make the case of why mobile publishers should help carry the technical burden.

In this talk, he’ll explain why Flaregames built a publishing platform that takes the sweat out of user segmentation, player behaviour tracking and other technical stuff that every F2P game needs.

12:00 – Swiftly after that talk, the good doctor Mark Ollila will explain why gaming these days is less about the game itself and more about the social experience that comes with it.

The thrust of the talk is inspired by lessons learnt developing social games platform Eva, which allows gamers to watch, play or just be in the company of others. The platform will be launched through US colleges.

12:20 – Wrapping up the track this year is a panel on the biggest mistakes games developers still make.

And that’ll wrap up the track for this year. However, those eight talks make up just one track out of 12 the show will have on offer. Which include our Indie Track, Esports Academy and the Game Changers track, the latter of which will take a close look at chat app gaming and hyper-casual.