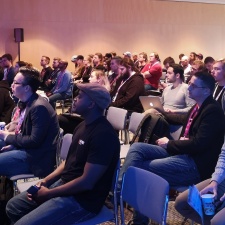 Pocket Gamer Connects is back in Helsinki for what's to be our biggest Finland conference yet.

More than 1,200 visitors are expected at the show, representing some 600 companies. The event runs from today and ends tomorrow evening (September 11th to 12th).

The talk entitled ‘Levelling Up – How To Move From A Small Indie To An Established Publisher’, covers trends and observations gathered from Ogury’s work with publishers of all sizes, and includes tips on using data to your advantage, how to push for simplicity in your tech stack, and improving ad revenue.

The session covered data relating to the use of casual and hyper-casual apps. Ogury's data showed that casual and 'arbitrage' titles were more popular amongst women (53 per cent) and the 35 to 44 and 45 to 54 age groups. Hyper-casual meanwhile was said to be more widely popular with men and younger age groups.

Escaich also disclosed session time data amongst mobile users worldwide during May 1st to August 31st, which showed that hyper-casual titles are rarely played regularly during a week, and often become inactive after a short while.

But that’s not all going on today there are a number of tracks with talks from our large roster of speakers this year, including the Monetiser track, Developer Toolkit, Game Changers: Hypercasual, Trade Trends, East Meets West, Live Ops Landscape, Connects X and Blockchain Basics.

You can check out the full PGC Helsinki schedule here.

Not to forget out Fringe Events. The IGDA Mentor Cafe kicks off at 10am today, while the Pocket Jam also begins today, as well as the Very Big Indie Pitch in the afternoon.

And of course, the day will be full of business meetings, whether through our SpeedMatch system or Pitch & Match.

The first day of the show will be rounded off by the fantastic Pecha Kucha sessions (a regular for the show and a must-attend), and the infamous Global Connects Party, this year sponsored by Pixonic. The party will take place at Virgin Oil Co., Mannerheimintie 5, 00100, Helsinki.

Not at the show? We’ll be reporting on the talks as they happen on PocketGamer.biz and BlockchainGamer.biz. You can also keep up with what’s happening on Twitter using the #PGCHelsinki hashtag.

We’ll also be filming the talks to publish on YouTube in just a few short weeks following the event’s close.