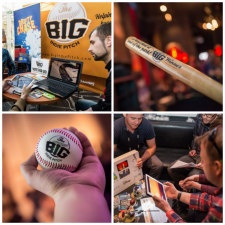 In 2018, we've taken the Big Indie Pitch series of competitions for independent developers to the UK, America, Europe, Scandinavia and the Middle East.

Well, with The Jordan Gaming Summit now just days away, you still have time to enter...

We're already looking forward to kicking off 2019 in style at Pocket Gamer Connects London on the 21st and 22nd January.

Participants in the Very Big Indie Pitch in London will have just five minutes to pitch their title to the first of five judge tables. Once the time is up, a horn will sound and it’s time to move onto the next table and do it all over again. Once developers have seen all five tables their turn is over and it's time for the next set of developers begin their pitches.

It’s a unique chance to place your game into the hands of some of the most influential minds in the industry and receive immediate feedback on your game over the course of the meeting.

We're also holding a PC Indie Pitch for those of you with big screen ambitions, as part of our sister event, PC Connects London.

All contestants get free entry to both shows, as well as Blockchain Gamer Connects London.

Following the pitch, we’ll also collect up all of the judges’ feedback and email this over to you so you have a written record of just what the judges liked about the game, alongside some tips and advice on how they think you could grow it as you move forward with development.

We’ll be covering every game in our round-up piece over on PocketGamer.co.uk and we’ll be conducting interviews with the top three which will be published right here on PocketGamer.Biz.

Finally, those we’ll also have a range of prizes worth thousands of dollars on offer at both pitches for the top three developers. Prizes the lucky developers will be able to use across our portfolio of websites in order to market and promote their game, alongside free tickets to a Pocket Gamer Connects event of your choice.

Deadline for entries are listed on each event page (entry details below). However, space is limited so the sooner you enter, the more likely you are of being shortlisted.

Oh, and did we mention it's completely free too?

Well if that describes you, then read on:

Hopefully this sounds as exciting to you as it does to us, as we're really looking forward to highlighting indie developers from the whole world over.

We look forward to seeing you all there. Oh, and don’t forget to bring your business cards...

Celebrating the sponsors for next week’s Pocket Gamer Connects London

Everything you need to know about Pocket Gamer Connects London