Join us for the PG Christmas Mixer in association with Ogury 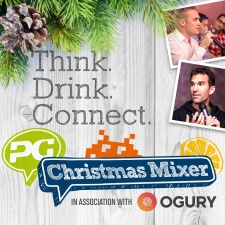 To celebrate the impending holiday season and to mark another year of industry success we're hosting the PG Christmas Mixer at the prestigious 30 Euston Square venue on Tuesday, December 4th for a night to remember! That's this week - attendance is free, but you need to register so please sign up while there's still space.

Thanks to the support of our friends at Ogury, we're bringing together a crack group of games companies, brands and creators for a free evening of insightful discussion, relaxed networking, drinks and canapes in central London.

Aside from the obligatory Christmas Jumper Competition (there'll be prizes!), Tuesday night's entertainment should look a little like this:

The panel is a great opportunity to hear from industry insiders about what's been big in the mobile gaming space in 2018... and (more importantly) what you can expect from next year. The panel includes developers, publishers, ad and data experts, and entrepreneurs - all keen to chat about their experiences.

Daniel Warner is head of supply at at the evening's sponsors Ogury, the leading mobile data company, providing the most comprehensive view of global user behavior across both app and mobile web usage. Before Ogury, Daniel worked at xAd, YuMe and RadiumOne. He'll be saying a few words before the panel kicks off.

Before Tripledot, Akin Babayigit was head of business operations & special projects at King Digital Entertainment. Prior to King, he spent nearly 5 years at Facebook, where he was the head of the games partnerships efforts in Europe, and was one of the people who launched the Facebook Audience Network. He holds an MBA from Harvard Business School, an MSc from Yale University, and a BS and MS in Electrical & Computer Engineering.

Lockwood Publishing is a leading indie developer and the team behind Avakin Life. Halli Bjornsson co-founded the studio in 2009, which has evolved to become one the UK’s top mobile games developers. Halli is now CEO and oversees the product and business development of the company.

Ben Clarke is Senior Marketing Director at Jagex, and through 2018 led the build to and launch of the first RuneScape franchise title to come to mobile in full – Old School RuneScape. As the first mainstream and fully-established Western MMORPG to offer the complete PC experience on mobile platforms, Old School RuneScape also introduced interoperable cross-platform play, allowing players to jump from PC to mobile platforms and back again. Ben’s a leading figure in the mobile space; prior to Jagex, Ben was Head of Global Publishing at NaturalMotion and Director of Mobile Publishing at Electronic Arts. He has also held key positions for Bandai Namco Networks Europe and Nokia UK.

Cem Ocalan is Head of Product at London based game developer Gram Games. An early member of the Gram team, he worked to produce the studio’s early hyper casual titles, and has run live ops and feature development on four of Gram’s major releases.

Moderator Oscar Clark is a consultant, mentor, and respected games industry ambassador. A pioneer in social games services since 1998, he was Vision Lead for British Telecom's Wireplay, one of the first online games communities, and Home Architect for PlayStation Home. He spent four years as an evangelist for Unity. As well as a frequent Pocket Gamer accomplice, he is also a game developer in his own right and lead evangelist for Admix.

After the panel, it'll be time for more wine and beer. You'll also be able to meet representatives of Pocket Gamer and the Steel Media team, so do come and find us. We'll be in fine festive mood and encourage you to join us for lively industry discussion and drinks.

Pick up new skills on all things game design with the PocketGamer.biz MasterClasses taking place THIS WEEK!