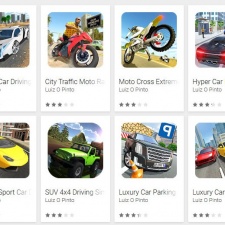 Google Play has removed 13 racing games after discovering each was installing malware once downloaded.

The offending apps were discovered last week by security researcher Lukas Stefanko, who revealed the breach via Twitter.

Don't install these apps from Google Play - it's malware.

All 13 games were released by a developer named Luiz O. Pinto and had accumulated over 560,000 installs before removal. Two apps had managed to make their way onto Google Play’s trending apps - despite what Stefanko calls “no legitimate functionality”.

When downloaded and launched, the apps would appear to start up before 'crashing'. In reality, the apps installed malware, before deleting the original app icon from the device’s home screen.

TechCrunch reports that the apps have since been removed by Google for violating store policies.

Reply
I. C. FOOLS Tech
I wonder when they wil start removing all the phony apps that employ the click farm/review mills in order to manipulate the consumer driven ratings? Or the phony apps put out by known bait and switch scam app devs that change their name with each new listing to hide who is really behind the app? Speaking of which, this publications little darling and often touted model for success is at it again with a new scam app - but no media coverage... why is that??

The app stores have no incentive (that 30% thing) to enforce their own TOS on the ever increasing amount of shady developers that violate that agreement and only take action when something like this blows up in their face... regulation is coming because they won't police themselves... long overdue
Posted 3 years, 7 months ago