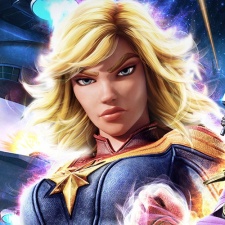 The superhero title is FoxNext’s first mobile game, which it worked on in collaboration with Seismic Games. That studio was later acquired by Pokemon Go developer Niantic back in July 2018.

As part of celebrations for the first anniversary, FoxNext has added Captain Marvel to the game’s roster of heroes.

To unlock Captain Marvel, the publisher joined with one of the most renowned players of the game, ‘Windowmaker’. After completing the Dark Dimension challenge, the heroine will be made available as an in-game character to all players from March 14th.

As well as Carol Danvers’ inclusion, the free-to-play RPG will receive its largest update since launching in March 2018 with a new gameplay mode called Alliance War.

The new feature sees players group together to create their own SHIELD Helicarrier by selecting which layouts, heroes and villains to appear. From there, players will raid other enemy Helicarriers to fight supreme dominance on the leaderboards.

The Alliance War update is slated to go live towards the end of March.

In the past 12 months Marvel Strike Force has brought in 27 further superheroes to boost the number of playable characters up to 92.