“The data centre is your platform” 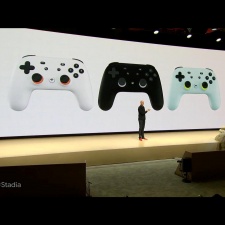 Harrison stated that the controller will sync to whatever platform players are streaming Stadia from before connecting via wifi to the game that is running in Google's data centres.

As demonstrated on stage, the Stadia controller can identify what device the user is wanting to play on - from smartphones to computer monitor or TV - then connect and continue the session from where the player left off.

Consumers looking to access the new Stadia system won't need to buy this dedicated hardware, as any USB controller will work with the platform, including those from competitors and third parties.

While the layout is similar to Sony's DualShock or Nintendo's Switch Pro, the Stadia controller adds a dedicated capture button for sharing video direct to YouTube from the data centres, as well as a microphone enabling Google Assistant functionality.

Beat 'em up fans will be disappointed to note that the D-pad lacks diagonal inputs for those aerial attacks or sweeping kicks.

Three different colour variations for the device will launch with the streaming platform, including black on white, black on black and black on light blue.

Interestingly, the controller featured in the presentation showed the famous Konami code button sequence on the back of the device, as first seen in Contra on the NES.