How marketing can be baked into game design 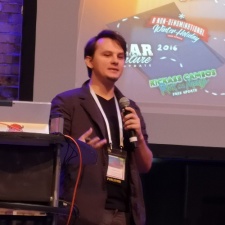 Speaking at Quo Vadis 2019, Berbece discussed how marketing can be baked into the game design document from the off, rather than simply being something thought about during and after development.

He highlighted how old arcade games would market to passers-by displaying high scores when the machine is not being used, laying down a challenge to potential players.

For modern games, Berbece defined marketing at the design level into three categories

For this part, Berbece referenced games by Zachtronics, some of which display to the user how well they’ve done during a game compared to other players. Players can then share this by hitting the ‘record GIF’ button and sharing that on social media.

There’s also user content marketing. A number of games have been built around the idea of allowing players to make the content themselves, such as LittleBigPlanet and Super Mario Maker.

In the PC space meanwhile, the modding scene has spurred on huge games such as PUBG and DayZ. The latter in particular led to an increase in sales of ArmA 2.

In other mediums, this might be known as the referral code - getting something in return for sharing with a friend and bringing in business for a company.

An example with games could be a buy one get one free deal, as was done for Risk of Rain 2 on Steam.

Another way to get people to either encourage friends to buy a game at the design level is to use achievements, such as ‘play in a game with seven or more players from your friends' list’.

This element covers attention to detail or something that makes your game stand out in particular. For example, Red Dead Redemption 2 got numerous headlines in the media for months for having horses’ balls shrink during cold weather.

Another example given of a small company utilising a special feature to gain publicity is WarpFrog with its Blade and Sorcery game. Because it has good hitboxes, the game is a popular mention on the SubReddit ‘HitBoxPorn’, where users share videos and GIFs about games that have really good hitboxes.

Something controversial can also be backed into the game’s design from the off. Berbece expressed his sadness how games like Hatred have used this, in turn gaining them notoriety.

He instead used the example of the game Genital Jousting as doing this the right way.

Lastly, Berbece also discussed “stupid ideas” that developers can use to help spread the word of their game. One example he gave was a mechanic considered for Move Or Die that would let players agree on an embarrassing tweet, which would then be tweeted out on the loser’s account.

In conclusion, Berbece stated: “A game’s success is most of the time defined by external factors, but maybe sometime it’s baked right inside the game design document.

The cost of running an influencer marketing campaign on streaming channels