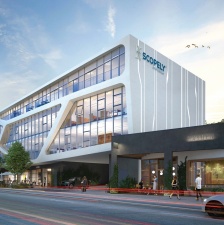 Scopely is following up a high-performing year with an expansion into a new Culver City HQ.

The mobile publisher will be the latest occupant at the Runyon Group’s Platform project in the city, leasing 60,000 square feet in a collaboratively-built space. The new location will more than double the company’s footprint upon completion later this year.

Scopely is reporting that an 80 per cent revenue increase year-over-year, along with the successful launches of Star Trek Fleet Command and Looney Tunes World of Mayhem, have driven the decision behind opening the new office.

“In just the last few years, Scopely has grown 15-times and this beautiful new space will allow us to continue to scale our physical presence to align with our rapidly expanding product portfolio and growing team. We couldn’t be more excited about this next step in our adventure.”

While Scopely is in the midst of expanding its Californian operations, it has previously looked beyond the US with the 2017 opening of a Barcelona studio.

The Pocket Gamer Connects conference is heading to the US via Seattle on May 13th to 14th.