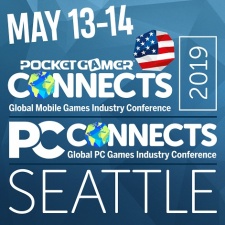 In case you’d missed it, Pocket Gamer Connects Seattle is next month! On May 13th and 14th, more than 500 games companies will be represented at the Grand Hyatt Seattle, covering the entire games industry from students and lone developers to investors, big studios, publishers and global megabrands.

Speaking of big names, here are a few that you can expect to see at our conference:

Following their impressive end to 2018 with almost $3 billion in Q4 revenue, NetEase Games joins us Stateside for Pocket Gamer Connects. After the recent successes of the battle royale genre, NetEase has also had its own joys with the genre, as Knives Out earned the publishing giant an estimated $465 million in revenue in 2018. Want to find out how they did it? You could hear from speaker Ken Li about how you could do the same, or even discuss potential opportunities for your own company.

One of the East’s leading pioneers in the games industry will be meeting the West in Seattle next month! Responsible for 15 per cent of 2018’s global game revenue, and behind massive mobile hits like Honor of Kings, Perfect World and PUBG Mobile, Tencent will always be a welcome sight at Pocket Gamer Connects as it continues to search for developers with new, interesting projects to join them on their journey. Could that be you?

The games development platform Unity will be coding its way into our Pocket Gamer Connects conference. As the world’s leading real-time creation platform, Unity is a must see this year for advice or opportunities for your own company. The company recently partnered with Tencent to help bring developers’ games to China.

Responsible for some of the biggest games worldwide, Nexon is a massive publisher in the games industry and they are joining us on our Seattle adventure! If you’re a developer seeking to get your game published or reach a new audience, speaker Robert Garfinkle will be there to discuss how to go about reaching Asian Markets.

Bandai Namco is home to some of the finest successes of mobile gaming. Dragon Ball Z: Dokkan Battle hit $1.6 billion in lifetime revenue after its best month ever in February 2019 whilst its other title Dragon Ball Legends surpassed $140m in revenue in the same month after only releasing in June 2018.

With an impressive lineup for Pocket Gamer Connects, we can’t go without mentioning PC Connects, can we? Again, some of the biggest names will join us in Seattle.

Bandai Namco steps across from mobile to PC, with speaker Karim Farghaly sharing the stage with other giants such as Epic Games, Microsoft, Valve, EA, Bungie, Square Enix and Stray Bombay.

Even better, your ticket gets you into both conferences!

Time is running out

Pocket Gamer Connects Seattle is coming up fast! And in the 13-track conference schedule’s slipstream, you’ll find a whole bunch of stuff to do, including Indie Pitches for mobile and PC, SpeedMatch, Investor Connector, The Global Connects Party and all the networking you can handle through our free and unlimited online meeting scheduler.

You have less than three weeks to sign up if you want to be part of something special this May. Get your tickets now!

Last chance to save on tickets to Pocket Gamer Connects Seattle