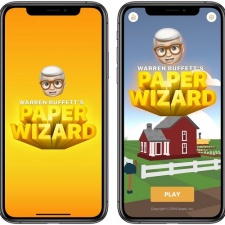 Apple has developed and published its first game in 11 years after revealing Warren Buffett’s Paper Wizard for iOS.

Reported by MacRumors, the news was unveiled by Apple CEO Tim Cook who made an unexpected appearance at Berkshire Hathaway’s annual meeting last weekend.

Cook spoke about his excitement of having Buffett as an investor before going on to show the game inspired by the billionaire’s upbringing in Omaha, Nebraska.

Taking heavy inspiration from the Atari classic Paperboy, players must throw papers while avoiding vehicles and birds to earn the highest score.

Paper Wizard was co-developed by Wildlife Design and Apple, with the release being Apple's first since Texas Hold ’em in 2008.

“Think you can toss a newspaper like the legendary Warren Buffett?” reads the game’s description.

“Test your paper-flinging skills as you make your way from the streets of Omaha, Nebraska, all the way to Cupertino, California. Avoid vehicles and birds as you deliver papers to buildings near and far. Will anyone collect enough Warren Bucks to dethrone the Paper Wizard? Probably not”

Warren Buffett’s Paper Wizard is free to download and is available on the App Store in most major territories.