Title made $65 million for the month of April 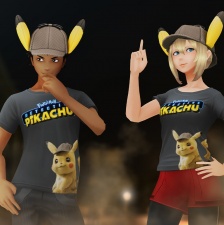 Pokemon Go developer Niantic has unveiled a Detective Pikachu-based in-game event that will coincide with the new movie's release.

During the timed-event, pokemon featured in the film will appear more commonly in raids as well as having a higher chance of showing up in the wild.

Double XP, themed field research and avatars will also be made available throughout, with Detective Pikachu photobombing players when operating the camera function.

In-game and real-world events have help Pokemon Go keep its longevity and raise sales over time. In April Pokemon Go held its third annual Eggstravaganza event which contributed to the game generating $65 million for the month, according to Sensor Tower.

This number represented a 15 per cent increase year-on-year for April, with overall spending for 2019 up approximately by $270 million or 33 per cent across the App Store and Google Play.

Detective Pikachu has released in Japan but will begin rolling out to cinemas worldwide this weekend, so it will be interesting to see how much of an impact on Pokemon Go's revenue the film makes.

Pokemon Go surpassed an estimated $2.5 billion from worldwide player spending in March, less than three years after the game launched.