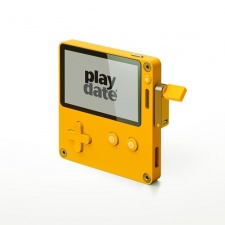 The Playdate is a small, yellow device with a black and white screen similar to the design of a Game Boy. It includes a D-pad, pause option as well as A and B buttons. The most noticeable feature, however is a crank on the side of the device, which is used as a rotational analogue controller.

Games will be download via the Wi-Fi and Bluetooth hardware installed and will be rolled out once a week for twelve weeks as part of the overall package. Each title will be brand-new and focus on single-player experiences.

Panic has worked on iOS and Mac for 20 years, while also being known for publishing Camp Santo’s Firewatch and House House’s upcoming Untitled Goose Game.

“Playdate isn’t trying to compete with the other devices that we already play and love,” said Panic’s press release

“It’s designed to be complementary. It’s designed to deliver a jolt of fun in-between the times you spend with your phone and your home console; something to fill the moments when you just want a game you can pick-up and play.”

Playdate will be available to pre-order in late 2019 for $149 with shipping expected in early 2020, though it’s unknown at this time what countries the handheld will launch. That price point will likely be a limiting factor in who is going to buy it, but we can't imagine that Panic thinks this is a mainstream device.

Only 20 percent of mobile gamers are fully engaged when playing