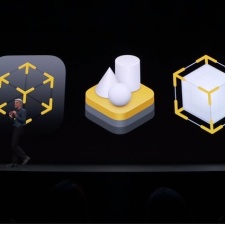 Motion capture and People Occlusion are the new headline features for ARKit 3.

During Apple’s Worldwide Developers Conference (WWDC), Apple showed off various new enhancements for its augmented reality tech, with the upcoming Minecraft Earth used to show off the new features and what’s possible with the API.

The new motion capture technology lets developers integrate people’s movement into an app. The video below shows how a person’s movements can be mimicked in real-time through an iPhone camera lens.

People Occlusion meanwhile means that AR content will show up where it’s designed to be - behind or in front of a person, helping make a virtual location more immersive.

Reality Composer meanwhile is a new app for iOS, the newly revealed iPadOS, and Mac. It’s designed to enable developers to prototype and create AR experience without prior 3D experience through a drag-and-drop interface and a library of 3D objects and animations.