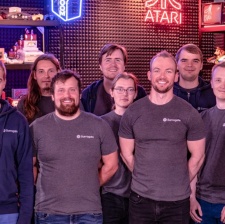 Finnish reality-focused developer Surrogate.tv has secured $2 million in seed investment to create its portfolio of “Surrogate Reality” experiences for mobile and other platforms.

Surrogate Reality games are described as games that let you control objects in the real world, instead of playing with virtual physics and graphics.

The first title will be Race Real Cars 1:43, which enables players to drive 1:43 scale RC car via the internet in real-time. The title is due to launch in August.

On top of creating reality games, the funding will be used to enhance Surrogate’s low-latency video streaming technology, SurroRTG.

Surrogate confirmed to PocketGamer.biz that the firm will be offering apps for mobile devices for playing the 'reality games'.

“To date, video games continue to be developed with the same limitations that existed at the time of Pong - creating fake physics and fake graphics in an attempt to mimic real-life,” said Surrogate CEO and co-founder Shane Allen.

“At Surrogate, we want to rethink this process by bringing in unique benefits that the real world has to offer and using them as major elements in the video gaming experience.

“Backed by some of the most well-recognised venture funds in the world, we’re building a new category of online entertainment - completely blurring the lines between what real and virtual worlds should and can be. We look forward to releasing the first stages of Surrogate gaming in the coming months.”