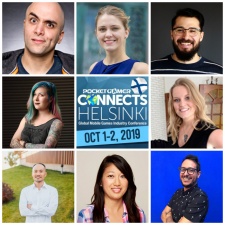 It only feels like yesterday we shared the first wave of speakers for Pocket Gamer Connects Helsinki, but now we are delighted to share the next wave with you!

They will be joining an already star-studded list of amazing speakers for our return to the motherland of mobile games, held at The Cable Factory on October 1st and 2nd, for an even bigger and better conference than last year.

Following the likes of Jam City, East Side Games, Lockwood Publishing and more - which you can find out more about here - these speakers will deliver their industry insights, experiences and advice to 1,300 games industry professionals.

And here they are!

At Pocket Gamer Connects, we are committed to championing local talent and we’re absolutely thrilled to share with you that Wilhelm Taht will join the lineup for Helsinki. As the former EVP Games of Rovio, and currently acting as an advisor and as a board member of several privately held and public game companies, Taht brings an absolute wealth of experience to our content for 2019.

Karoliina Korppoo brings 12 years of experience in the games industry and is one of the most prominent figures amongst Finnish game designers.

And another Angry Birds alumnus, Sophie Vo will offer advice on casting your own teams from scratch, as she shares her own experiences in building her team and how she crafted the recruiting process to do so. It promises to be a must-see talk for anyone looking to start their own company or building their next team.

Karoliina Korppoo of Visual Novel Entertainment also joins the list of amazing speakers for our Helsinki show. Following her successes with the hit game Cities: Skylines, which is currently the best-selling PC game to come out of Finland, she has switched up her approach and is pursuing interactive reading experiences and female audiences.

She brings 12 years of experience in the games industry and is one of the most prominent figures amongst Finnish game designers. We also have Polka Dot Studio’s Olesja Marjalaakso joining the show lineup, a studio which targets the demographic of young, urban females for their games.

Small Giant Games have lately been known for the success of their title Empires & Puzzles, which blends base-building and RPG mechanics in a fantasy setting and we’re looking forward to hearing from their Timo Soininen.

We also have Elite Game Developers’ Joakim Achren explaining the support and guidance on offer to anyone starting and building a games company.

Speakers from Canada to Russia...

World class speakers such as Leonardo B Luz and his presentation on UX design.

We’re also dedicated to connecting the global games industry, with hundreds of delegates attending from overseas. And that’s reflected in the international line-up of world-class speakers such as Square Enix Montreal’s Leonardo B Luz and his invaluable presentation on UX design, and what UX techniques a UX designer may use to save time and increase production quality.

The science of fun is needed when creating games, and Russia’s ZeptoLab most definitely understands that. Dylan Tredrea will share his insights on the gaming company that has enjoyed its successes with its Cut the Rope games being downloaded more than 1.2 billion times.

And anyone keen to explore the market potential in Russia would do well to catch Stanislav Sychenkov of Mail.ru’s seminar analysing the social economics of the region.

Mobile game publisher Tamalaki’s very own Martine Spaans will make the journey from the Netherlands, bringing 13 years of experience in the online gaming space. The company focuses on bringing the best casual games to mobile, and places a high value on customer experience.

Fellow Netherlander, Kay Gruenwoldt of Paladin Studios, works with some of the industry’s biggest names as partners, such as Bandai Namco Entertainment, DeNA and Plug in Digital to name a few.

Jukka Laakso on how they brought the classic franchise Alien to mobile.

Speaking of big names, Jukka Laakso of Rival Games hosts a session on how they brought the classic franchise Alien to mobile for the first time as a AAA quality premium experience with Alien: Blackout.

We’ll also be joined by Stephen Lee of Berlin-based publisher DECA Games, who are responsible for RPG games such as Knights & Dragons and Crime City. Zynga’s Sonja Angesleva will lead a session to help you understand project management too.

Be a good esport

ESL - Turtle Entertainment is best known for their prominence in the esports space, hosting competitive tournaments across the world, such as Intel Extreme Masters, ESL One, National Championships and Intel Grand Slams. Their Spike Laurie will share his insights on this highly competitive sector.

Riot Games is best known for their smash hit MOBA game League of Legends, which itself features in ESL tournaments, as well as their own tournaments, like the Mid-Season Invitational, League Championship Series, and Worlds. Alongside Spike, Riot's Mo Fadl also will share his insights on the growing competitive sector.

The connects conferences always present compelling content about the latest growth sectors in games. Thoughtfish GmbH’s Christina Barleben seminar will look at the current market for Augmented Reality games and what is significant when talking about real-world data in a product, as well as obstacles to overcome and the technical details that go into these games, such as art and game design. And sticking with AR, Antler Interactive’s Anna Norrevik will offer advice on how to release your ARCore game within six months from scratch.

And now for something completely different… what about the prospect of voice-only games? That’s the topic for Doppio Games’ Jeferson Valadares when he looks at how voice is the new touch, and making games for the next wave of interaction.

The fun doesn’t stop there! We also have senior representatives from the biggest brands and exciting innovators in the games industry:

Stay tuned as we will reveal more names in the lead up to the show...

Join us for our return to the motherland of mobile games for the sixth edition of Pocket Gamer Connects Helsinki, this October! Book now and save up to $450 with our Super Early Bird offer. But don’t wait too long - prices go up next week… Get your tickets now!

We’re still adding to the schedule and if you’d like to speak to our audience, we'd love to hear from you! Not only are we actively seeking expert speakers for Helsinki right now, but submissions are already open for future Connects events in MENA this November - and even London in January 2020.

If you’d like to speak at any of our international events, get in touch using this form or email patty.toledo@steelmedianetwork.com.