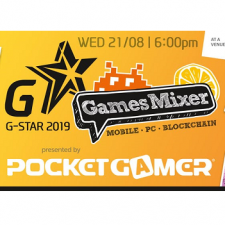 Last week, Gamescom was the place to be if you work in the games industry. It attracted 373,000 visitors and over 31,000 of those were trade.

A fixture of the event in recent years has been the Korean pavilion. This year, for those wanting to learn more about the market in the region, its opportunities and challenges, there was a dedicated evening to attend hosted by Pocket Gamer and G-STAR. It was just 10 minutes’ walk away at the luxurious Hyatt Regency hotel by the riverside, on the evening of Wednesday 21 August, when a packed crowd attended the G-STAR Games Mixer 2019.

There’s no shortage of things to do at Gamescom, but the evening event proved popular with 1,800 people registering to attend. A Pocket Gamer Mixer is always a highlight of Gamescom – it’s the perfect networking event to end a busy day of conferencing. We run them every year and this one, in association with Korean event organisers G-STAR, proved to be a particularly successful one.

The mezzanine level of the Hyatt Regency – enjoying the benefits of the setting sun - was packed with visitors from across the international games scene, from indie devs to the CEOs of big ad companies and more. Drinks and food were followed by a sit-down session in the auditorium, where G-STAR introduced the size of the opportunity presented by Asia’s biggest games expo - over 232,000 visitors to the G-STAR show last year!
If you want to explore the opportunities presented by Korea and Asia, this year’s G-STAR takes place November 14-17 (B2B November 14-16) at BEXCO, Busan, Korea. For more information and to register, visit https://www.gstar.or.kr/eng/

The packed audience at the Games Mixer heard from five experts in the Korean games scene on subjects including legislation, esports, the need for partners in the region, and more. The panel was called, "Secrets of the South Korean games industry – a look behind the scenes of one of the most vibrant games markets on Earth” and the guest panelists were Laurent Pawlowski (Samsung), Sean Lim (Kunlun), Patrick Streppel (Gameforge), Don S. Kim (G-STAR/Lucrion) and Marcelo Serres Gomez (Pebblekick). The moderator was our own Dave Bradley.

The 30 minutes flew by and there were questions from the audience – and a giveaway when G-STAR’s Mr Don Kim had gifts for guests drawn at random from the crowd. Afterwards, the winner of the Big Indie Pitch was revealed, before the crowd retreated to the spacious mezzanine bar for more beers and networking.

We’ll bring you a follow-up article featuring further insight from the panelists soon.