Event will be presented by Google Play 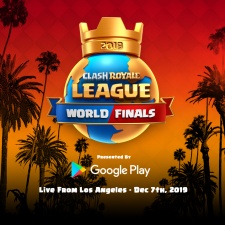 The Clash Royale League World Finals 2019 will be hosted in Los Angeles, California with $400,000 in winnings up or grabs.

Supercell announced the details of the event with Google Play confirmed as sponsors. The two top teams from Asia, China and the West will fly to the city all to compete for the championship.

The Clash Royale finals will take place on December 7th, 2019 at the Shrine Auditorium in front of a live audience.

Tickets are priced at $20 each.

“We were so humbled by the response to last year’s inaugural CRL World Finals, so we’re overjoyed to bring Worlds stateside for another thrilling competition,” said Clash Royale League commissioner Chris Cho.

“We’ve been working hard since last year’s event to make this an even better experience for the Clash Royale community. We can’t wait to see what the world’s top players have in store for both us and fans as they showcase their talents on one of Los Angeles’ most legendary stages.”

The first-ever Clash of Clans World Championship was held in Hamburg, Germany, with the Nova esports team taking home $250,000 in prize winnings.