Free-to-play title is available to download on iOS, Android and PC now 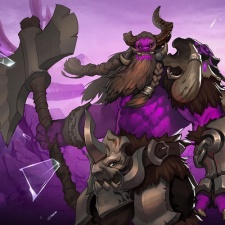 After many months in soft launch, Epic Games and Chair Entertainment have launched Battle Breakers, their hero collector RPG for mobile ad PC.

First announced back in February 2017, Battle Breakers has been built by as a “passion project” by a small team of developers at Epic.

The free-to-play title is powered by Unreal Engine 4 and takes heavy inspiration from 90s Saturday morning cartoons - including its own theme song.

The game sees players assembling the ultimate team of super warriors to take back their planet from space monsters while freeing the world’s greatest heroes from technomagic crystal.

Battle Breakers is available to download on iOS, Android and PC now.

According to Epic, Battle Breakers will feature over 1,000 dungeons to explore, across various different terrain such as volcanoes, forests, glaciers and more.

To coincide with the launch, Epic is offering a Dark Beastman Hero as a bonus for any user that beats the tutorial. The character can be claimed through the Chests menu before the promotion ends on November 27th, 2019.

And this is what the game looked like two years ago; clearly things have changed in the meantime.